Douglas Felde (°1961, Northern Minnesota, United States) creates paintings, mixed media, and photographic artworks. His works are an investigation into representations, depictions, and ideas that call out the emotions that linger on the edge of our subconscious. Felde’s works often create a visual seductiveness that lures the viewer to a proposed duality of emotion. His artwork, whether austere with dark and turbulent undertones or bright and reminiscently hopeful, illustrate the conflicting emotions of the human condition, and from this a disconcerting beauty of simplicity emerges.

Early artistic influences ranged from preschool years observing his mother work with oil and acrylic paints to fourth grade where he attended an experimental school for the gifted (the Athena program). The Athena program promoted the arts to students at a much earlier age and with much more intensity than typical for the era. Modern dance, creative writing, and visual arts were an integral part of the daily curriculum. One of the elective courses that Felde participated in was photography and darkroom. He didn’t know it at the time but this early window to photography and the art world would play a significant role later on. 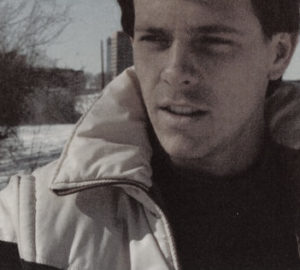 At 19, while attending college at the University of Minnesota and bartending at various Minneapolis clubs, Felde immersed himself in the artistic community of the progressive music scene taking place in the early 80’s. It was during this time that a close friend gave him a 35mm camera as a gift. Photo sessions Felde performed for modeling friends gradually evolved into a commercial photography business that Felde moved to Chicago in 1985.

“I had no idea that I was going to be an artist and wasn’t aware that I had become one until I was in my late 20’s/early 30’s. It was a gradual realization.”

1990’s, Felde became increasingly entranced with photography as fine art.   “A key turning point for me was when I created an album cover and other promotional pieces for blues great Eddy Clearwater – I was hooked on the creative process.”   His chosen media during these years was a digital fusion of traditional film photography and media that included acrylics, ink, metal, glass. Beginning in 1999, Felde spent 4 years on the road creating and selling his artwork across the U.S. at over 150 national juried art shows. His work quickly gained attention and awards including best of show in photography at the Chicago Wells Street art show in 2000. Felde has been represented in galleries in Chicago, New York, Pittsburgh, and more.

After returning to Chicago in 2002, he and 3 partners transformed a retail district farm house into an art gallery and pottery studio. It was during this period that he began to use acrylic painting and acrylic mixed media as his primary forms of art. He continued to create and sell his work from the gallery in Marengo until 2009.

In 2010, Felde moved to Los Angeles where he has participated in numerous art shows in the LA arts district. Douglas Felde currently creates art from his studio in downtown Los Angeles.